I know it has been a long time since 2013 or so I did not write anything. I'm back for some choice in winter dorama. After finished watching K-drama Legeng of the Blue Sea and Goblin, I only picked doramas for winter season. List of what I have watched for 1 episode:

1. Tokyo Tarareba Girls
I'm watching from Sony Gem TV cable. It is funny, and maybe the only winter dorama I'm watching that can make me laugh. It is the story of Yoshitaka Yuriko and her friends who are longed for boyfriend in their 30s. There is one man with white hair, Key, who always disturbs their dreams. Will Yuriko understand what the fate told her through this distratcting man?

Watched 1st episode and I will continue watch it. This is a good romcom dorama from a manga.

2. Shikaku Tantei Higurashi Tabito
Also watch it on Gem. I have watched the special episode in 2015 so I don't need to guess what it is. And I also read the manga. Truthfully, the special ep is mysteriously great. But I'm disappointed at the manga because it is boring and fell out of topic for many chapters. Actually came from a novel.

The story is focused on Higurashi Tabito, a man who can't use his 4 senses, except his eyes. He is able to see an aura or feelings of living things. With that, he helps people as a detective with the help of Yamakawa Youko. But his main objective is to find who kidnapped him in the past and get revenge, resulting in his loss of senses. The main focus is drugs so it's a bit different than most detective story (about killing or kidnapping). But the way the story told in manga is very boring. I hope the dorama will have more fun.

I find it a little bit boring. But I'll continue to watch for more episodes because Tabe Mikako and Matsuzaka Tori are one of my favorite.

3. Totsuzen desu ga, Ashita Kekkon-shimasu
Also came from a manga. Live action dorama is booming nowadays, on TV or movie. But it is either turn out good or bad depends on the storywriter. Totsuzen desu ga is one of a few in negative part. The story's pace is a bit boring, but Asuka's character is different than most josei's manga. While mostly the heroines are strong and not want to get married, this one is the opposite, but still has her strenght.

The story is simple. Just that Takanashi Asuka wants to get married and be a full-time housewife even though she is good at her job but she falls in love with a man who doesn't want to get married, a TV announcer Nanami Ryu. This is the first time I watched Nishiuchi Mariya and Yamamura Ryuta's work. I find they are suitable for each other (oh no, I might ship them). But one of my biggest mind to watch it is because there is Kagimoto Akira from boy hiphop group Lead. I've been following them unfaithful since more than 10 years ago, since in middle school! Wow, I'm already an office lady now for 5 years and still following him!! He's my favorite man in the world, I mean as a fan.

I will continue to watch it and hoping for Asuka's happy ending. I think the manga will have its climax in a few chapters ahead, or so? Since meeting is followed by separation. Btw, I watched the 1st ep without subs because I can't open Mega cloud on my browser. Dunno what's wrong.

I don't know if I will watch Seirei no Moribito Season 2 or not. I watched the 4 episodes of season 1. But season 2 has 9 epis Oops, already know him since Dame na Watashi ni Koishite Kudasai and HappiMari before he sings for Yuri! On Ice. More review, on my blogger post.

This is the link for Trick or Alice CG. I'm sorry I can't post anything at the moment, so I'll take time to do uploading for a few games I've played but not yet upload its CG. Right now, I uses time to watch "Running Man" (because it's too funny to see in my daily sadness) or sleeping because I'm not in the mood to do anything. Well, just tried a few minutes of Chou no Doku FD..

I've uploaded Wajin Asaki's CG as I've promised to . I hope you'll enjoy looking at it. I know the scenery are all beautiful. I hope everyone will also like it. I might post it in WP too if I can. Oh well, I wanted to write my own story in real life but with different names. But don't know if anyone will read it. Let's just play with that... 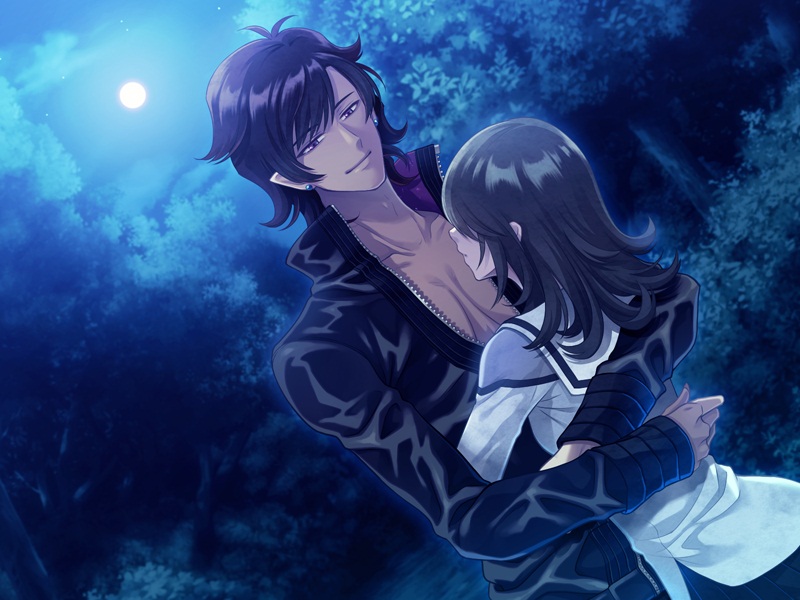 Rurou is a wolfman and also stays at Yamato’s side. It’s not like he wanted it, but it had to be to save his friends and kinds. Most of the time, he attacked Saya and wanted her to be his woman. 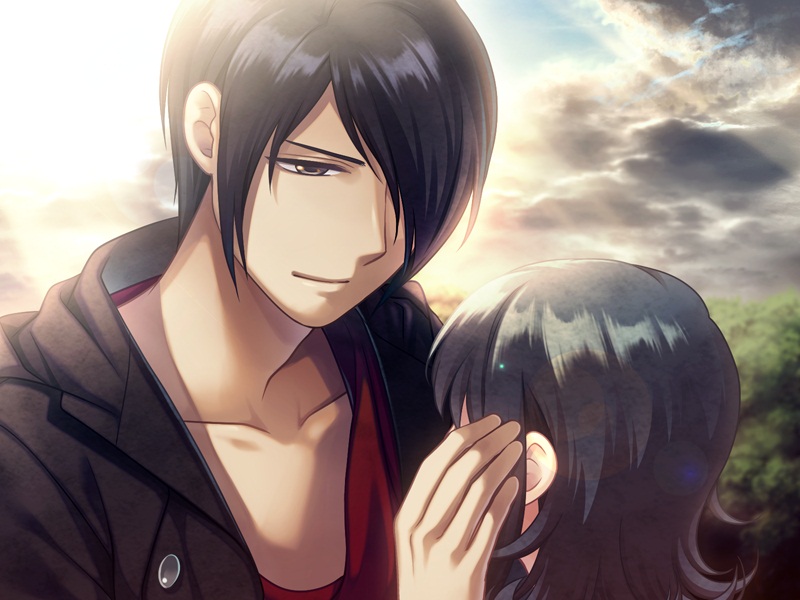 Saya’s older brother, even though they’re not blood related. Since child, they’re bound to marry each other to merge their precious bloodline. But Shuu is often going out to slay ayakashi as he’s a Yukarimon, a group of ayakashi slayers or something like that, with Akira as his leader.

I should have done it in LJ for a while after a few attempts failed to log on to WP and tumblr. I might need LJ until it's all solved, when I have time for that of course. Now, let's get to the review: 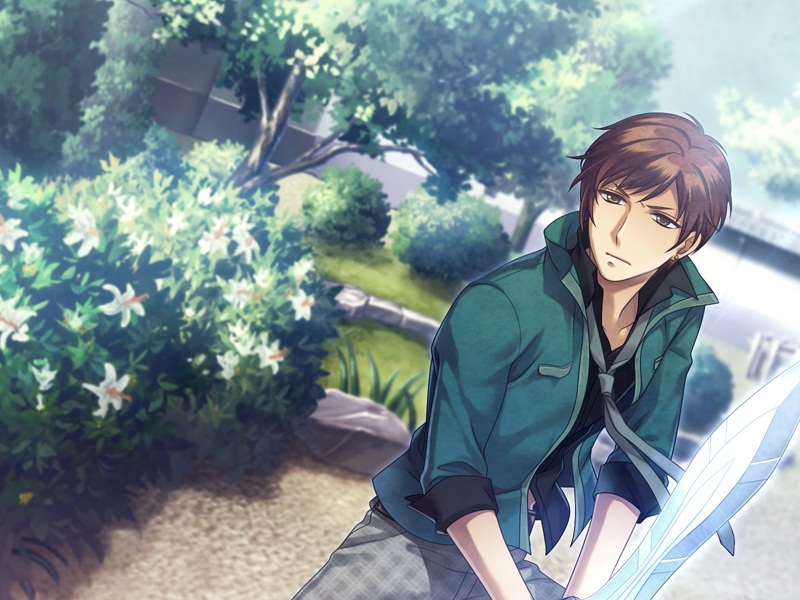 A grandson of important miko-like baba in Yata Village. Most of the time, he works parttime and abandons school often. Also, his personality isn’t that reliable. I always scared if he give the sacred tools to Yamato Takumi, as he always admire. Has kendo skill and might be that’s why, he can use God Sword in no time.

Well, nice to post something on lj again. I'd been gone for long from lj and now that I had something to write, especially not related to reviews, I will post it here. This post will be about my anticipating anime for Fall 2012 (since Summer anime didn't satisfy my needs, Fall might be a lot better with horror-action themes). This what I will try watching from the most anticipated to the least:

This is not related to my blog, actually. But just to fill something new in my lj. I've challenged myself to be one of supervisor in National Exam for 4 days from Monday-Thursday next week. Thankfully, my almameter is participating in it so I can registered with my friends through my university. This is useful before I can get a job. I mean, the salary is not bad (about $105 for 4 days). The problem is.. I must get ready at the designated place before 5.00 AM to distribute the materials to school!!! I hope I won't get any trouble in there, such as cheating or not enough question/answer sheet... Let's hope the best for this year's national exam (for all students studying, fight!).

Well, you are mostly known about stalker, right? They're someone really persistent who wanted to have you all the way, following you around to anywhere place you'd be going, and searching information about you from all sources they'll get. I don't know why I encountered that problem right at a time when I have graduated. It's scary, troublesome, and annoying. It's my fault for trusting people easily that I didn't have curious feelings when he asked my number (and I kept blaming that day is a bad day+luck for me). He asked me going out with him, I replied I've appointment already and he changed the day, I didn't reply anything. He also stalking my FB, commenting my friend's post (we talked about that weird guy right away he did saw it).

So, I had blocked his FB from mine and mine to him. Yeah, like that ever stop him from stalking me. He kept sending me messages that he just want to be friends with me, but I'll keep ignoring him. And today, when I came to my university to meet my friend (She's having a phase 3 thesis defense, while I had phase 2), he's there before the emergency exit! While he didn't have any friend, I've been wondering why he could come there. Of course I wouldn't take the dangerous exit, and brought my friend to another path. Awww, that's such a tiring day.. And tonight, he asked my friend through Blackberry Messenger about me. That's become really annoying. I don't want him to annoy my friend!

Meanwhile, as if my life already became heavier, my school's friend who had confessed (and rejected, sorry) to me in the past, had been messaging me again. I'm worried if he's still have feelings for me as his messages are a little... uhm, what should I say? Too friendly.. Because we never talked after I've graduated from high school and he just recently sent me messages. But, I'm sure I won't be scared of him as the one above.

Gah, that's not all! Truthfully, I like this guy I've met just twice. He's a really good guy (my friends said that too), clever, a bit hard to approach, and I'm sure he's still single. Funny thing is, one of my friend wouldn't want to approach and talk to him much because he's always reading english technology book (that's weird in my uni because we aren't in an international university which had english as main language) or Times magazine. Speaking of technology, of course I like them. I also loved to play parts of my CPU, changing its spareparts in the past time (Uhm, I know I'm not feminine). Anyway, I feel comfortable talking to him. He also already had a job despite haven't graduate yet (and yes, he will tomorrow!). We had the exact same TOEFL score (that is really really weird), first-born child, etc, etc..

WHy is my LIfe so full of dramas??? There're 3 guys indeed at the same time. And, sorry for reading this blabbering story of my life.

These are 10 facts about my self, especially in writing reviews for my Wordpress blog:
1. I use glasses in real life, but just at class (I don't use it that often).

2. Because of that, I can't see well, begin around this year. I saw blurry face of people from far away. But it's not too difficult, so I'm still not using my glasses! Yeah, even though I must see public bus' number to know its direction, I'm still not using it.

3. And the continuation of it, I must use big font on my Wordpress and find the right theme for it. Sorry, if it's too big compare to any other sites.

4. I have bunnies, but its number reduced this year to 3 by sickness. One of them is very naughty. He always asks for food, jumping on the table or chairs, but I love him! Well, he is really a BRAT, though!! And the fact I am the one taking care of him while he's just a baby (He was born in my house), I'm like his real mother, right? But he doesn't care about me...

5. To write review for PC games, I won't have any trouble. Just open MS. Words and write it anytime my brain already full of it. But for PSP, I often played it in front of my laptop to write its review. Or, maybe, while writing Are You Alice? review, I used my phone's note. Sometimes, because my laptop was being repaired, I must use paper to write it. But it's too troublesome to type it back in MS. Words, so I don't prefer that method.